While we've come to depend on smartphones for much of our daily lives, too often we run apps, services or systems that unnecessarily hit battery life. 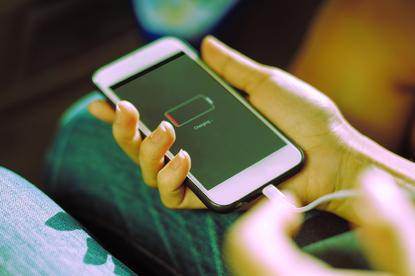 Sure, higher resolution screens and faster processors may be the sexy features pushed by smartphone makers. But, truth be told, most users just want a phone that won't die by the end of the day.

"Longer battery life" was the top answer from 75% of 1,665 people polled by USA Today/SurveyMonkey last year about the top feature they wanted in a new iPhone. And a Morning Consult poll of more than 1,800 people also conducted last year found 95% chose battery life as the most important feature \ when selecting a new smartphone.

Even so, battery power technology isn't improving anywhere near the same rate as processor power.

"Battery life is getting better... marginally. But, it's not keeping pace with Moore's Law. These are incremental improvements," said Nikolas Schreiber, CTO and co-founder of Hoplite Power. The company makes vending machines that rent battery chargers  similar to the way RedBox rents movies.

Until someone invents a better battery, it's worth reminding smartphone owners that a little power management goes a long way. While some of these tricks may be old hat, they will still help you maximize battery life go a lot longer between charges.

On an iPhone, turning off apps can be as simple as accessing the app manager and swiping the apps off your screen. Android phones have more granular settings than iOS does for power management, said Jack Gold, principal analyst with J. Gold Associates, and most Android experts agree it's generally not advisable to manually stop apps on your own.

Instead, you can limit certain apps' ability to consume power in the background, as we'll cover in step 3 – and if you're using Android 9 or higher, you can lean on the operating system's Adaptive Battery feature, located in the Battery section of the system settings, to automatically limit the amount of power made available to apps you don't use often.

Smartphones have built-in GPS functions, which is great when you want to know how far away you are from a location or if you need directions to the nearest coffee shop. But more often than not, users don't need location services. Turn that off, as it's using your smartphone's antennas to constantly search for your location.

3. Find and disable apps that use the most power using background activity

Snapchat, Facebook, WhatsApp Messenger, Netflix, and Amazon Shopping also top the list of apps that can suck a battery dry. Also look for any news or weather alert app as a possible power-draining culprit.

Some apps are constantly updating you with information that you may not need.

"The apps that are engaging the various radios and doing autonomous communication in the background are the ones that will be draining the battery the most," said Jordan Mayerson, CEO of Hoplite Power.

Open the Battery section of your phone's system settings, then either scroll down that screen to find the app-by-app breakdown or press the three-dot menu icon in the upper-right corner and select "Battery usage" (with more recent versions of Android). Tap any app with a high usage percentage alongside it and see how often it's burning through battery power in the background.

For any app that's using a high amount of battery power in the background, look through the app's settings and see if you can disable some of its background features. For instance, many news and social media apps will automatically connect to the internet and refresh data every hour (or even more frequently) – even when you aren't actively using them.

If your phone has Android 9 or higher, you can also go a step further and restrict an app's ability to use the battery in the background at the system level. Find the app in the Battery section of system settings and then look for the "Background restriction" option.

Airplane mode will save some energy, particularly if you are on an airplane or somewhere where there is no coverage, in which case the phone will continuously search for connections and waste power.

If you're driving and you don't have a Bluetooth connection via your car's infotainment system, that may also be a good time to switch to Airplane mode before you begin a trip. And, if you don't need Bluetooth, turn that off, too.

Even if you need to be connected to cellular, turning off Wi-Fi and Bluetooth will save some power.

5. Turn your screen's brightness down

This is especially important when watching movies or other streaming content. At night, you especially don't need your screen turned up to 10. Screen battery draw is significant; that's why phones turn off the screen so quickly when not being used, Gold said.

Also, turn down your volume when listening to music. While this is not a major power draw, it does help, according to Gold.

Your smartphone's display sucks a lot of juice so leaving it on when you're not even looking at it is pointless. Shorten the amount of time it takes for your phone to go into sleep mode.

On any reasonably recent Android phone, the system will also activate something known as Doze mode whenever your screen is off or the device hasn't been used in a while. That automatically minimizes network use and other resource-intensive services for as long as your phone stays idle.

7. Turn your phone off completely

While it's true that turning on your phone uses more power than simply waking it from sleep mode, turning it off when you're not using it for hours at a time will conserve power in the long run. If you're going to sleep and don't have an outlet or charging cable, simply turn the device off.

This includes any display graphics and animations. The more advanced the graphics are (games, videos, photos, animations), the harder the processor and graphics chip in your smartphone have to work. More activity means more battery use.

9. Turn off all those notifications.

Smartphones natively do their best to conserve power by going to sleep or into a lower power mode, but if you're constantly receiving notifications from Facebook, Twitter, or Super Mario Run, you're keeping your phone awake – and sucking power.

10. What to do when your phone hits low power mode

When your phone gets to 10% power or lower, and you're out and about, you might withdraw from using social media to save some juice for an Uber, or you might throw your phone on Airplane mode. Whatever your tactics are, it's an inconvenience but it's better than having no communication whatsoever when your phone dies. You can always toggle the phone back on to make a call or send a message.

When you do finally find a outlet or charging station, if you place your phone in airplane mode, it tends to charge faster because it's using fewer antennae and other processes in background.