Protesters take to streets to fight 5G roll out

Claim technology is "greatest threat to humanity we have ever faced" 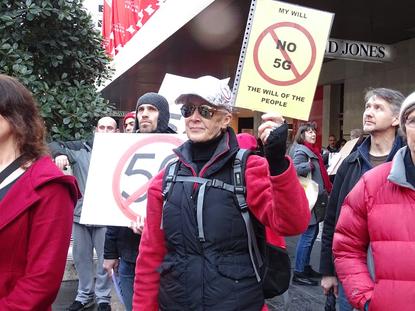 Protesters took to the streets in a number of locations on Saturday, against the roll-out of 5G.

The protesters, wearing red with one wearing what appeared to be a tinfoil hat and another dressed as Santa, carried signs reading "Stop 5G" and "100 times more radiation, 100 times more harm".

In Perth a similar number turned out in the rain to protest, with signs reading "No 5G, stop involuntary exposure" and "5G is a weapon".

Smaller protests were mounted in Brisbane and Hervey Bay. Earlier this month a demonstration was held outside council chambers in Northern Rivers calling for a moratorium on the technology.

Similar protests have been held around the world in recent months.

The protests were promoted in a number of Facebook groups including Stop5G Australia which claims 5G is "probably the greatest threat to humanity we have ever faced" which is being delivered by the "psychopathic ruling elite". The group has more than 4000 members.

Flyers were distributed at some of Saturday's protests promoting the use of a 'multi field electromagnetic radiation detector' to check for "wireless radiation coming to your neighbourhood".

The detector – the GQ EMF-390 – is offered for sale on a website shown on the flyer for US$108. As first reported by EFTM.com, the website operators receive a cut of every purchase made through the site via an affiliate program.

The protesters claim the coming ubiquity of such waves in the environment will lead to a wide range of negative effects including memory loss, miscarriage, obesity, autism, ADHD and asthma, although provide little evidence to support these claims.

A large group of protesters turned out to try and put a stop to #5G today outside @telstra in Melbourne today. Watch: pic.twitter.com/RydXrmzUuG

While the physiological effects of electromagnetic radiation change with frequency, mmWaves cause non-ionising radiation, which is generally considered to be harmless, and is less able to penetrate solid objects than 4G.

A Swinburne University team which is part of the Australian Centre for Electromagnetic Bioeffects Research, and a key contributor to the International Commission on Non-Ionizing Radiation Protection review say they are "yet to see major red flags" concerning 5G.

The World Health Organisation has said that there is "no evidence that exposure to low level electromagnetic energy is harmful to human health".

The Australian Radiation Protection and Nuclear Safety Agency (ARPANSA) is responsible for setting the standard around radiofrequency (RF) electromagnetic energy (EME) exposure limits for all devices and towers, including 5G. The standard "takes into account uncertainties in the scientific knowledge" the agency says.

RF EME limits are regulated by the Australian Communications and Media Authority (ACMA). ACMA says of 5G that "typical operating levels [of mobile phones and towers] are less than a few per cent of the ARPANSA exposure limits".

Community fear about the roll-out of 5G has grown considerably around the world in recent months. Some analysts predict growing citizen concern could slow the roll out of 5G networks.

The Belgium government in April halted a 5G trial in Brussels, while the Silicon Valley town of Mill Valley has already banned 5G over health concerns.

ARPANSA earlier this month published a blog post to counter the "misinformation circulating throughout the community" about the impacts of a 5G mobile network roll-out.

"Contrary to some claims, there are no established health effects from the radio waves that the 5G network uses," the agency said.

"We urge you to be cautious of claims from anti-5G campaigns. These campaigns are generating unfounded fear and concern within the community," it continued.

Telstra is also working to allay fears about the technology. In a blog post earlier this month it said "we are confident 5G adds no risk compared to existing technologies" explaining that its own research found 5G EME to be similar to 4G and Wi-Fi.

"The EME levels measured were found to be well below the safety limits, and in many cases over a thousand times lower" the telco said.

According to a May report in The New York Times Russian government–owned news network RT has spreading lies about 5G in order to use public pressure to slow its adoption.

RT routinely refers to 5G radio waves as “radiations” and the move to the new standard as a “dangerous experiment on humanity”. The news network has reported, without evidence, that 5G may cause learning disabilities in children, brain cancer, infertility, autism, heart tumors and Alzheimer’s disease.

The fear-mongering comes as the Russian government is working hard to build 5G networks domestically at speed, seeing 5G as a low-cost way for the nation to compete against richer countries.

Further protests are planned for Newcastle and Sydney this weekend.