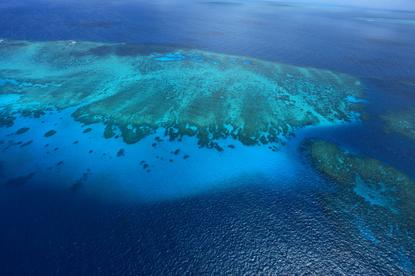 Dr Robin Beaman compares the feeling of collecting his USB sticks from boats returning from the Great Barrier Reef to opening gifts on Christmas morning.

“You never quite know what's going to be in there, but I'm really looking forward to it. And sometimes it’s a real surprise,” the James Cook University marine geologist says.

Since the beginning of the year, Beaman has led a crowdsourcing project in which a small number of private boats are fitted with a data logging device, about the size of a mobile phone.

The device draws data from on-board chart plotters, which use GPS and echo sounders to help the boats navigate. Typically the picture of the seafloor provided by the chart plotters is not logged; “it just appears in the moment and then is lost,” Beaman explains.

By logging that data, from vessels that journey to rarely visited corners of the reef, highly accurate, three-dimensional maps of previously uncharted areas can be drawn up.

And thanks to data from the citizen research fleet, the vast natural wonder is beginning to give up some of its secrets.

Much of the existing depth mapping – known as bathymetry – of the Great Barrier Reef comes from Royal Australian Navy hydrographic survey data collected over the course of many years, which is published by the Australian Hydrographic Office.

“They tend to focus their survey efforts in areas where it’s most needed; safety of navigation is their driver, knowing where the navigational hazards are, in shipping channels, entrances to ports, where the coral reefs are. But that leaves an awful lot of the Great Barrier Reef untouched, simply because big merchant ships are not going near there,” Beaman says.

“When you get into really offshore areas, or even out into the deeper waters beyond the edge of the Great Barrier Reef, there are big blank white spaces there on the chart. That's simply because authoritative surveys had never been conducted there,” he adds.

While the navy rarely visits those ‘blank white spaces’ there are vessels that do.

Beaman has recruited a number – a couple of luxury motor yachts, expedition dive boats, small hire vessels, aquarium fish commercial boats, an environmental centre boat, and one operated by the Queensland government – to collect depth data while they’re at work or play out on the reef.

“They’re going to places that most boats don’t go,” Beaman says. “The diving expedition boat, they’re out every week, they’ll be a real workhorse. Or the commercial aquarium vessel, they’re doing 200 plus day a year out on the water working. They’re going to unusual creeks, chasing fishing grounds around the near shore.”

To be able to log the data, the vessels have been fitted with a SmartLog data logger, made by UK company TeamSurv. The device was first tested on the Reef in 2018, with the help of underwater-film specialists Biopixel and their expedition vessel ARGO.

The device is wired to the boat’s chart logger, and the set-up is calibrated by Beaman. When the vessel next sets off, the logger starts collecting all the chart plotter’s NMEA (a marine electronics standard) data, which includes depth, location, speed and course.

“That echo sounder is just running constantly. And that means I'm getting a depth reading about every two seconds,” Beaman says.

Beaman regularly collects the USB sticks when the vessels return, then back at his university office, runs the raw data is run through a simple Python script to extract the required data, which then goes into specialist hydrographic processing program CARIS HIPS.

CARIS takes into account where the sensors are on the given vessel (adjusting for the distance between the GPS aerial and the sonar receiver, for example), and the tides at the time of the depth reading.

The resulting map is compared against existing datasets, such as Project 3D-GBR, to check there are no anomalies. The data is then shared with various reef mapping bodies, like the Australian Hydrographic Office and the International Hydrographic Organisation Data Centre for Digital Bathymetry.

Scaling the project is currently limited by finances – the Great Barrier Reef Foundation is providing $10,000 for the loggers to be installed – as well as Beaman’s time, but there are plans to increase the fleet of bathymetric vessels next year. There’s also an effort underway with QUT to see the logger fitted onto an autonomous surface vessel.

“What we don't have yet is the ability to automatically upload that data to the cloud, so I can sit in comfort of my office and have a stream in real time. That would be the next ultimate step,” Beaman says.

Data from the deep

Although the volunteer vessels only started logging data earlier this year – around a million 'soundings' or depth data points have been collected so far – their work is already helping scientist better understand the Reef.

“They’re going to places where there’s no digital source data at all. Suddenly I'm seeing features that I just couldn't see before. They're mapping old river channels and detailing the edges of coral reefs, that are deeper than we expected,” Beaman says.

The new depth data is used to improve the accuracy of the 3D depth model of the Great Barrier Reef. Detailed knowledge of the seafloor depth is critical for understanding the distribution of seabed habitats, to provide data for coastal inundation forecasting, flood plume modelling and crown-of-thorns starfish control efforts. It also gives scientists valuable records of the past response of the Reef to climate and sea-level change.

“We’re trying to understand how the Great Barrier Reef became the shape that it is. At the edge there are these submarine canyons, great undersea landslides. Big parts have collapsed and fallen into the adjacent basin. It’s left these big scars on the edge. The drowned reef this 1000km long reef that sits on the shelf edge in 50 to 100m of water, the proto-reef. We only know about this because we’ve mapped it, you can’t see it in satellite imagery, you have to map it with sonar. Why does it exist? What’s living there now?” Beaman says.

“It's a big, big ecosystem. And if you want a 3D model that accurately reflects the shape of the reef, you need data from everywhere,” he adds.