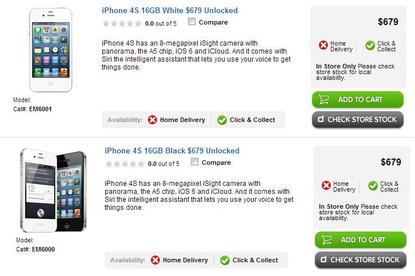 The iPhone 4S, as it appears on the Dick Smith Web site.

Australian electronics retailer, Dick Smith, will become one of the world's first retailers to sell unlocked Apple iPhone devices, but it will not stock the latest iPhone 5 model.

The retailer will today begin selling unlocked Apple iPhone 4 and iPhone 4S models through 50 Australian retail outlets across all eight states and territories.

While iPhone's are sold at various other Australian retail stores, these have traditionally been sold on contract plans through carriers Telstra, Optus, Vodafone and Virgin Mobile. iPhone 4 and 4S models were previously only sold outright through official Australian Apple retail stores.

Dick Smith will sell the 8GB model iPhone 4 for $449, while it will also sell the 16GB iPhone 4S for $679. Unlike other products, the both iPhone models can only be purcahsed in-store and can't be bought online through the Dick Smith Web site.

The 50 Dick Smith retail stores selling the iPhone 4 and iPhone 4S outright are listed as follows: