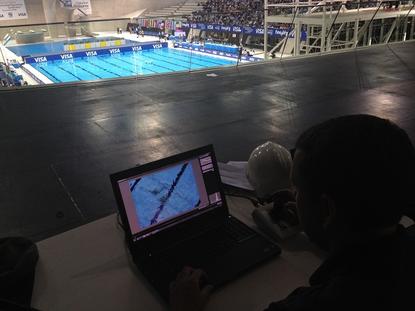 A Getty Images photographer testing the robotics camera setup which is controlled via a laptop. Photo supplied by Getty Images.

Photos from the Olympics Games in London will receive the 3D treatment this year due to a bespoke SLR camera rig developed by photography agency, Getty Images.

Speaking to Computerworld Australia, Getty Images senior director of editorial photography, Ken Mainardis, said the process is made possible with the use of two standard digital SLR Pro cameras mounted on the rig.

“The rig which the cameras sit on has to be in perfect alignment to be able to imitate the human eye to create two files which are than overlapped in post-production to form the 3D image,” he said.

The rig was designed by the agency’s UK chief sports photographer, Shaun Botterill.

“The way we see 3D [photography] is that it’s on the cusp of an explosion in use,” Mainardis said.

He added that 2D photography was all about shooting sports people moving left to right and leaving clean backgrounds, whereas the process is reversed for 3D photography.

“With 3D, it’s all about objects moving back to front so busy backgrounds, which are the enemy of 2D photography, become essential to the 3D photographer. That’s because a messy background makes the 3D image look really interesting for viewers,” he said.

A selection of Olympic events, ranging from the opening ceremony to athletics events, will be photographed using the 3D camera rigs.

“We have two photographers [Shaun Botterill and Mark Kolbe] assigned to the 3D project and they will select the visually strongest events,” he said.

The 3D camera rig was first used for the UK Royal Wedding in 2011 where, according to Mainardis, the photographic agency had a real “learning curve” producing 3D images of the royal procession through the streets of London.

“We learnt about the different way of shooting events in 3D and the post production where the separate files are put together. The photographers have been learning the new techniques for the last 18 months,” he said.

In addition, Mainardis said the 3D photography will be deployed again for the 2014 Winter Olympics in Sochi, Russia.

“We wouldn’t be getting involved with this [3D] project if we didn’t see a long term use for it,” he said.

“3D will become part of our everyday sporting coverage ranging from football [soccer] matches to sporting events in Australia,” he said.

Getty Images is using robotic rigs set up on the roofs of London stadiums that will allow its photographers to control the camera from a laptop.

The camera is mounted in a cradle and can be moved into any angle. Settings will be changed via the laptop and a joystick controller.

The agency worked with its camera supplier, Canon, and UK company, Camera Corps, who both specialise in robotic camera technology for broadcasting of the Olympic Games.

“Camera Corps have expertise in engineering robotic rigs but their real experience was in the operational aspects of the Games such as robotics rigging and installation of the rigs,” Mainardis said.

Mainardis explained that Getty Images needed to use robotics for this Olympics as some of the stadiums in London, such as Wembley Arena, do not have the catwalks or overhead infrastructure that its photographers normally use to shoot events.

“On the opening ceremony night, the robotics rig will also be used to locate cameras in the floodlights of the stadium,” he said.

“There would have been no possibility of putting a human photographer amongst the floodlights.”

Robotic rigs will also be used at the Sochi Winter Olympics at ground level or on mountain sides which can’t be accessed by photographers.